The purpose of a chlorine feeder is to maintain a consistent feed of chlorine into the pool. If the feeder malfunctions or is not filled or is not set properly, then the chlorine level will not be right and the pool will not be fit for swimming.

There are several types of chlorine feeders. Each feeder is specifically designed to feed a certain form of chlorine. Be sure you are putting the right type of chlorine into the feeder or you may damage the equipment or hurt yourself.

This is the most common type of feeder and almost always utilizes stabilized chlorine tablets (trichlor tabs). Of the erosion feeders, there are two types, in-line and off-line feeders. 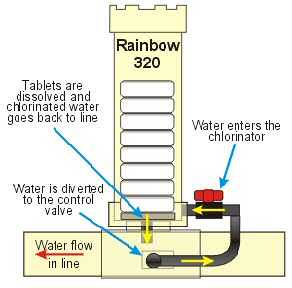 An inline chlorinator is one that plumbs right into the piping on the return side, after all the equipment. It is relatively easy to install because you just have to cut the piping and glue it in just like a coupling or a tee.

The downside to this type of chlorinator is that it frequently has flow problems. The chlorinator has a “scoop” which grabs some of the water and forces it up and into the chlorinator.

The problem is that sometimes the flow is not adequate to push the water up and into the chlorinator and establish a sufficient flow to properly erode the tablets. In addition, the chlorinator tends to build up an air pocket in it, and tablets do not dissolve in air (obviously), and only the bottom tablet might dissolve, thereby greatly reducing the chlorine output. You also run a higher probability of developing chlorine gas inside the unit. 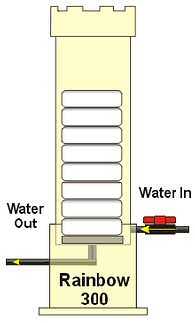 Because of the way this one is plumbed, it does provide better water flow through the unit than the Rainbow 320 inline feeder. This unit is still susceptible to developing an air pocket because if there is air in the line, it will rise to the top of the unit (because air is lighter than water), and an air pocket will develop.

The Rainbow 300-29x is more of a commercial grade chlorinator with much higher capacity than the 300 model. The 300-29x has larger tubing and a larger chamber, but the greatest difference is that the water exits the chamber at the top, so that any air buildup is purged out almost immediately. The 300-29x has the best flow of any of the chlorinators. The illustration at the left shows the design of the unit, but the unit is actually about twice as tall as the 300 model and has twice the capacity (approximately).

Control Valves can be a bit of a problem on the offline chlorinators because you have non-filtered water going into the chlorinator. Grass and other debris can get stuck in the valve and keep it from operating well. If the valve will not fully open or close, then it probably needs to be replaced.

Floating chlorinators are a viable alternative for some home pools, but we do not recommend them for several reasons.